Jeremy Corbyn and his current wife, Laura Alvarez Corbyn, "charge upwards of ten Pounds Sterling for a mid-sized bag of Fair Trade “artisanal” coffee to wealthy Lefty students and Islington snobs, while their labourers in Mexico receive less than one-Pound Sterling TOTAL compensation for their efforts."

Yes you read that right - the farmer, manager, land owner and ALL of their workers producing the Labour MP's Fair Trade coffee receive one pound TOTAL compensation per 10£ bag of coffee from the business run by the greedy socialist MP and his wife

The following article by Liberty Defender co-founder and former UKIP parliamentary candidate, Jack Sen, British Resistance Party leader, Carl Mason,  and Tim Scott exposes the Corbyns for the hypocritical Marxist frauds they are and details the misery their workers endure because of Corbyn family greed.

There's a reason we rarely see Jeremy Corbyn's wife in public, in spite of the fact both Jezza and Laura Alvarez Corbyn live and work in bustling Finsbury Park, Islington.

Corbyn's desire to keep his personal life secret has little to do with the vile socialist's wish to protect his wife from the media spotlight or her being a foreign national from Mexico - hailing from a most privileged colonialist aristocratic background we should add (doesn't bother us but it should bother Corbyn's comrades).

Nor does it have anything to do with the fact that Laura Alvarez is the Labour leaders third wife or more than two decades his junior. 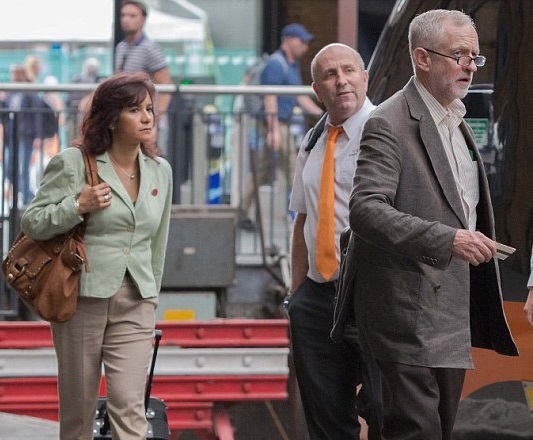 Jezza's motivation for keeping Alvarez away from the public eye is simply to shield himself from the scrutiny he would be subjected to if his critics knew about the vile business practices he and wife Laura get up to in order to fund their lavish London lifestyle.

The greedy couple's abuses are in fact so egregious, even Jezza's most ardent Marxist apologists would blush.

You see, JC and Laura are capitalist overlords. They make a veritable fortune from a coffee business they run from their Islington home - a business built entirely off the backs of Mexican and Guatemalan migrant labour.

"And Mrs Alvarez Corbyn is a "capitalist" of the very worst breed - the sort of exploitative businesswoman people like Corbyn claim they are fighting to the throngs of unwashed students and Corbynistas parading our streets seeking out non-existent racism, exploitation and homophobia to oppose in Corbyn's name.

She is what Lefty cretins typically refer to as a neo-colonialist - a person who exploits the worlds most vulnerable people to a degree we haven't seen on these shores since miners - afflicted with black lung - were left to die penniless in their thirties by their incredibly wealthy employers. These people burn down rainforests, bomb the world's poorest nations for profit and yes, act as the Corbyns do in deprived nations like Mexico.

Unlike Donald Trump - a man Corbyn relentlessly attacks - who pays his workers a fair wage, the Corbyns exploit every last soul producing their coffee, before duping their wealthy misguided British and American customers into buying their exorbitantly priced product with obscene lies they've paid their workers a fair wage. I'm the last person anyone would call liberal, and rarely concern myself with this sort of thing, but the Corbyn clan are undeniably ruthless and brutal to these poor people. It is quite sickening, even if one chooses to ignore Corbyn's conspicuously hypocritical leftist ideology." Jack Sen added

For the past several years, Miss Alvarez (Mrs Corbyn) has been the sole director of Mexica Products Ltd, whose registered address is Corbyn's home in Finsbury Park, North London.

Working as a Café Mam distributor, Miss Alvarez sells 250g bags of coffee for just shy of a tenner, while the dozens of workers toiling on the Corbyn gulag, the "managing farmer" and "land owner" producing the coffee makes just under one pound, as we noted earlier.

Her website says Corbyn's blend is ‘true artisanal Mexican coffee’ made ‘with passion and dedication from the co-operatives and small family producers’. It refers to the business as "Fair Trade".

But in reality, there's nothing fair about the Corbyn coffee farm. Workers are abused, exploited, left to defend their homes from thieves who prey upon the farm at night. Women are up at the crack of dawn, working 15 hour shifts in the sweltering Yucatan heat, while their children are left to rot on their own in the purpose built shacks the Corbyn farm has erected to house their exploited migrant workers.

We feel it is fair to refer it to the Corbyn farm due to the fact that ALL the coffee grown at Cafe Mam farm is sold to Corbyn's London based business.

One woman we were able to communicate with via my contacts in Monterrey, Mexico told us that her daughter was ill with gastroenteritis and dysentery several years back and sadly died due to the infection. The reason? She didn't have the money to pay for the child's medical care. The care costs the equivalent of one 5 pound bag of Corbyn's coffee. My question to her manager was, where was Corbyn? The man who travels the globe fighting for the oppressed, championing non-whites from London to Palestine was nowhere to be seen.

This shows Corbyn cares nothing about people, just about his own power. You'll struggle to find people anymore oppressed than those that slave on Corbyn's Mexican farm.

Liberty Defender co-founder and former British soldier, Tim Scott, who lives in Corbyn's Islington constituency was so upset by what he heard he has decided to circulate leaflets to all the Islington coffee shops stocking Café Mam, in the hope he can expose the Corbyn's vile practice.

"This man can not be allowed to run our country. He has no regard for the working class as is evidenced by how he treats his Mexican workers. He is a horrible man who can not be trusted with our children's future. The conditions these people live in is truly shocking. This is pure greed and needs to be exposed."

A section on Corbyn's website headed ‘We care about you’ boasts that Café Mam, made by a co-operative of 669 farmers in the highlands of southern Mexico and Guatemala, is certified organic. It claims: ‘All the members of a family, together with workers who receive a fair wage and who enjoy good conditions of employment, help to produce the coffee.

"The fact is, while Conquistador Alvarez and Comrade Corbyn, who run their lucrative coffee business from their home in Islington, feign solidarity with exploited workers in Britain, they line their pockets with millions and millions of pounds and pesos they've made at the expense of poor Mexican and Guatemalan migrants- people subjected to conditions that would shock our Polish migrants.

By sticking a few fancy labels on their crap coffee - falsely claiming they've paid a fair wage to a third world person, helped fight racism in some far off shithole or adopted a one-armed transgender Mexican (humour) - they've also been able to dupe some unsuspecting liberal moron into spending a fortune on coffee one can find at Lidl for less than a fiver."Jack Sen remarked during our SKYPE call.

All while their workers suffer and starve....

Like most Champagne Socialist frauds, Mr Corbyn foments conflict between workers and management in Britain, while he and his wife bank millions from the toil and suffering of the globe's most vulnerable people.

Yeah, Lefty snowflake scum, you got that? Your dear leader, Comrade Corbyn, is no different than the Bolsheviks who exploited Russia's most vulnerable to enrich themselves and acquire power 100 years ago. Like them and YOU, Corbyn cares NOTHING for the poor.

So who is Mr Corbyn's mysterious wife?

Laura Alvarez, a Mexican of European ancestry, is the proprietor of Café Mam, one of Mexico's most exploitative coffee empires that peddles arthouse coffee to the US and Britain, on the backs of central American migrant misery. Quite shockingly, the exploitative operation is run from Corbyn's home in London.

Tales from the battlefield - Tim Scott discusses his time fighting ISIS in Iraq alongside the Kurds (podcast, video) & retired US Naval Officer Dave Gahary (80 minute podcast) discusses the coverup of the attack on the USS Liberty

Liberty Defender activists take to the streets of London to challenge Soros funded Antifa agitators (videos), and to the Yorkshire Dales to support veterans issues